When Toddlers Think, What Do Their Minds Say? 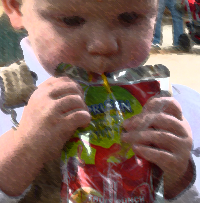 The other day, my 11-yeard old son looked at his newly walking brother and wondered… how does he think? When he feels a toy, looks at his siblings, or eats one of the dog’s treats, what does he say in his mind? As adults, we think thoughts in our native tongue. We take advantage of the framework that language gives us to organize what goes on in our mind. Look at a banana and you may think “yellow” or “nutritious”. For a toddler that is old enough to process, but not speak coherently, what are the actual thoughts that run through his mind? An interesting question… that is considered with words.

DARPA, a research agency of the US Department of Defense, attempted flying a vehicle today that could one day travel at 13,000mph. At those speeds, the unmanned Falcon Hypersonic Test Vehicle 2 (HTV-2), could fly from New York to Los Angeles in 12 Minutes. More strategically, a vehicle like this could reach anywhere in the world in under an hour.

Mid-20th century attempts at flying aircraft through the sound barrier of Mach 1 had already proved challenging. The pressure waves that form at the sound barrier change the dynamics of flight, impacting aerodynamics and overall control. Fast forward to today, and engineers are grappling with travel at 20x the speed of sound that could encounter even further unknown hurdles. Today’s test flight unfortunately failed when contact was lost; however, the premise is still an amazing endeavor.

Our Alien Brothers on Gliese 581g…. What Would They Say About God?

Last year, NASA discovered Gliese 581g, a planet 20 light years away that could be one of the most “potentially habitable” worlds ever discovered. At a distance of over 100 trillion miles, it is certainly well outside our lifetimes to make contact with it. However, it’s still amazing to think about we could learn from any “Gliese 581g-ians” living on this alien world.

One of the first things I’d like to know would be what their feelings are about God. They could be advanced technologically, use three arms, or have green skin, but their views on religion would still form a fundamental piece of their culture. It’s been that way on Earth for thousands of years. Regardless of one’s beliefs, Jesus and Mohammed are undoubtedly two of the most influential people who ever shared our planet.

Has God reached out to them? Are there other manifestations of a god that guide their lives? Have they fought wars exclusively over religion as people have on Earth? Considering the diversity of religions that have evolved amongst cultures on Earth, it’s hard to imagine our intergalactic brothers without religion in some form.